secrets in the walls | kauranga | Gallery 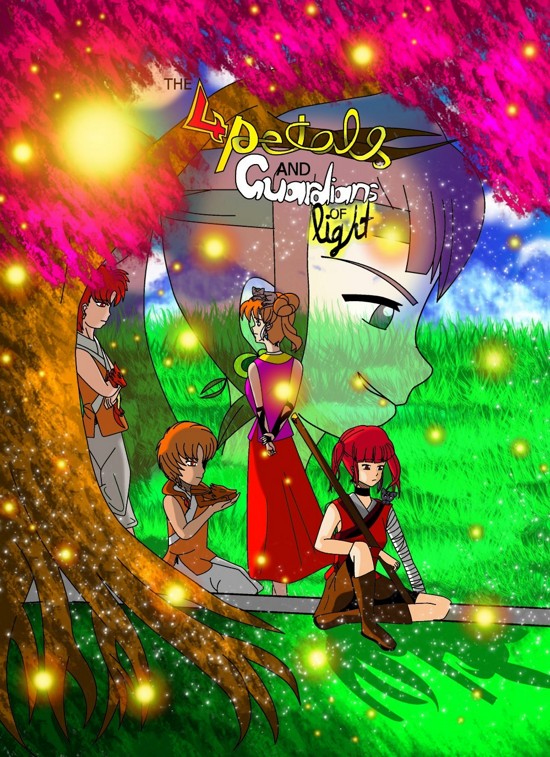 This is a website to show you one of series that is coming up.

There is 6 series And it is called The 4 Petal And Gaundians Of Light.

These are all of the fire member.

This is Fiona Riu. She is a reincarnation of a god, a main character of the series 1 to 5. she is a princess, princess of the fire kingdom She has a curse, and it is that there is some beasts inside of her, her emotions is the trigger. She allways think that Dire is just like her but not the murdering part. Her element is fire. 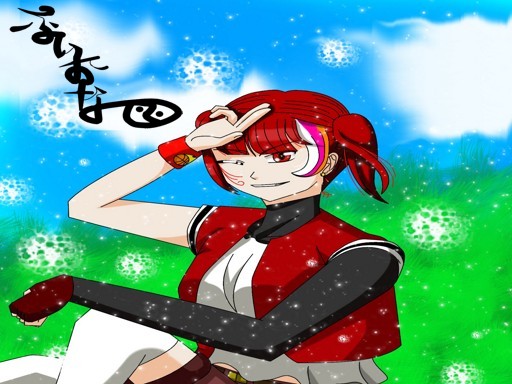 This is Meirin Riu. She is Fona's sister, which allso means that she is a princess too. She knows fiona's secerts. Meirin can bring people of the dead back to life, but she only save them when they are dead only for a moment. Her element is fire. 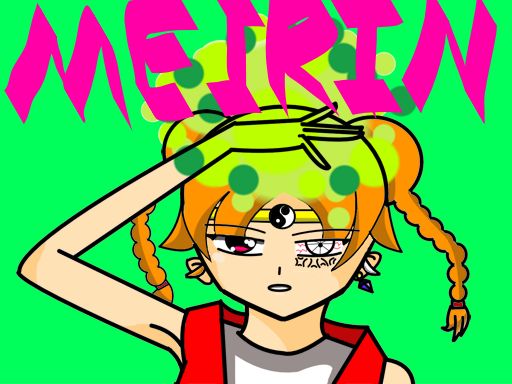 This is Tokuna Sunagu. He is from the sunagu clan he is one of the surivors. He was one of the prisoners for the enemies of the planet, his cousin is one of them, and Fiona and Meirin saved them on the first series. On the 6th series he has a thing for Dire. His element is fire. 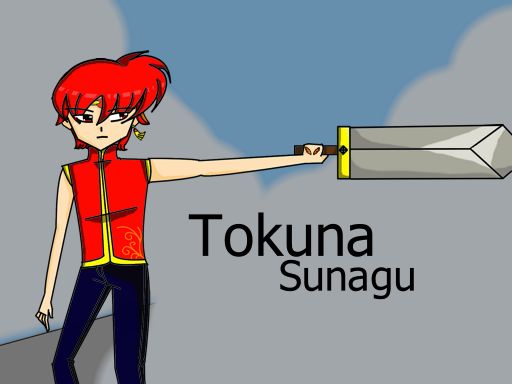 This is Kiwa Sunagu. He is Tokuna's younger brother he is allso a surivors. He is kinder like a twin to Tokuna. He is the youngest of the fire members of the compiney. He does not like Fiona's pinchis. His element is fire. 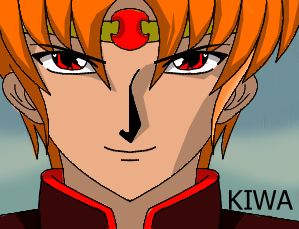 These are all water members.

J.Frost Ice. He is a prince, prince of the water kingdom. He is allso a reincarnation of a god, and a main character of the series 2 to 5. He controls nature, And he talks to much. His element is water.

Izu Ice. She is J.frost's cousin. She is working in the headquarters a few times. She has a mask that can make her see what are other people's files. She is best friends with Meirin, she calls her Merrin, and meirin call Izu A-zu. Her element is water.

Zenzu Hibbi.He is from the Hibbi(snake) clan. He can see the light or darkness inside a human beings like a mirrow. Fiona, Izu and J.frost saved his clan from the false master of his clan. His element is water.

These are all earth members.

Joji Haunter. He is allso a prince, the prince of the earth kingdom. he is allso a main character of the series 3 to 5. His has a habit, it's annoying Fiona all of the time, which is gobbling ghosts. He all ways pick a figth with Fiona, Avan, J.frost and Dire. his element is earth.

Dire Wolf She is someone who distroyed her own planet, she is allso a princess of that planet, it is called Zoria. And came to Fiona's planet Linania, and met her at the earthkingdom she is allso the main character of the series 3 to 5. Her element is fire.

Kunai Rider. He is from the rider clan, they hobby is roller-blades, they are really good at riding. A few times he chalanges Fiona for a race. And fiona, joji and his petal-pet Vezu are his first friends. On the 4th series he became the master of the flying-board's game. His element is earth.

Ezuno Chain. She is from the Lion Clan. She was a slave for a few years, when Fiona chalenged the leader, and she won, the leader let Evuno go. Her element is earth.

These are all Air members.

Avan Riu. He is Fiona's and Meirin's cousin. He is allso a prince, prince of the air kingdom. And a main character ot the series 4 to 5. He taught Fiona how to fly flying boards, He can find a god as well. He used to be the master of the flying-board's game, until Kunai joined. He pick a fight with Fiona, Joji and J.frost, And he allway does not listen to reason. His element is air.

Sheezu Witch. She is from the witch clan. She is Avan's friend. She taught Meirin how to fly. She likes music where ever she is, she is like a Drama Queen. She dance evey time someone plays a song. Her element is air.

Windderrena Elf. She an elf, she is 18 years old. She is allso Avan's friend too. She can fly in thin air as well. She is the oldest member of the compiney. Her element is air.

Now it is About the 6th series. This is the series of the previous character's reincarnation from planet Linania to planet Earth.

Her red hair is brighter then Fiona. She is the main character. She was born in Japan, and her culture is China. She went to China for a high school trip for a year, and learnning Kung-fu. On the second day there was an attacked by a creature called the O.S,T.O it means the outer space toxit objects. From the shock, from that time she remembered her time as Fiona.

Her hair is darker then Dire. She is a chef of the compiney that Fio just joined called T.W.H.C it means The World Heros Compiney. They both from the same Plamton-form-2. They are good friends, in reincarnation and the new life.

Unlike the reincarnation these two girls are Red-Data-Animals.

Yuri is the European Wild cat. She acts like a cat, if she sees anything that looks like fish she acts weird, she does Rhythmic gymnastics, she runs around like one in missions.

Chiko is a Bake-neko. A Bake-neko is a two tailed demon cat from Japan. They form the Feudal era. The thing about these two girls that the Red-Data-Animals that they were born with talent from the animals that are extincted. They are from the plamton-form-1.

He is a criminal in the past life, but now he is a hero. And the reincarnation of Oda-Nobunaga, her name is Naga. He all ways teasing both Naga and Luke. But on missions he acts like Jack-the-ripper.

As for his reincarnation he steals, but still he is. He is on the same plamton as Luke. In past life they are brothers, and they are still brothers.

As fir her reincarnation does battles, now in missions she does act like him. One thing that is funny about her is that she gets a nose-bleed every single time she gets shocked. She allways get pissed off when Jake is around, and when Tengo laughted at her about her nose.

Now the 7th Season which is also bifferent from other seasons, it's about doubles.

His way is similar to Fiona, but he crys a lot, and his attitude is rude and an idiot trype that is much different then fiona.

his look are different then Dire's, but they like the same things which makes them the same.

The 4 Petals And Gaurdians Of Light

This is the first series. It's in the Fira Kingdom, the land of fire. The fight starts when Fiona and Meirin Found Luna, Fiona's petal-pet. Their school was attacked by a dark-suzaku, the red-vermilion-bird of the east. They found out that they are members of a compiney of light since they were 10 years old. A few weeks after their grandmother died they found out. Her name was Liana-Riu, she was the previous suzaku-witch-petal of the compiney, that was her title. Everyone gets a title, Fiona is the new suzaku-witch-petal. Meirin is the light-witch, her was the previous light-witch. They went to the enemies hidden land and found Tokuna and Kiwa. Tokuna and Kiwa are the new suzaku-brothers. After a battle they went off to find their comrades.

The 4 Petals And Gaurdians Of Light In The Water

Next characters: J.Frost, Izu and Zenzu

This is the second series. It's in the Watev Kingdom, the land of water. The 3 teenagers from the fira kingdom came to the land of water, they were wearing hods to keep cover. A few hour after they got in they were attacked by a boy who lives there, Fiona stayed behind at distracking him, the rest went to the palace. just before the last attack Fiona's hop came off, And the boy riped off his jacket because it was burned. And the boy saw Fiona's neck and tryed to stop, And Fiona allso saw the boy's sholder and she tryed to stop allso. But they both were nocked out. The boy was J.frost the Seiryu-petal, the seiryu is the Blue Dragon of the south. Soon after that Fiona met Izu the seiryu-sister. All three of them went to look for the last one. Then they were attacked a clan that the Zenzu was in, He is the seiryu-brother. They saved his clan. After a battle agian they went off to find their next comrades.

This is the third series. It's in the Era Kingdom, the land of the earth. the members of fire and water came to the land of the earth. They got cort by the guards, as they go in to the Palace, the king let them go because his Joji is one of the members, he is the genbu-petal. One time Fiona was riding roller-blades she met Kunai, he is the genbu-brother. then the kingdom was attacked they met Ezuno the genbu-sister. After the battle fiona found a cave and went in and met Dire.

This is the fourth series. It's in the Ari Kingdom, the land of the wind. The members of fire, water, and dire came to the land of the wind. As they get there they got cort in the barrier, and got unconscous. After that Fiona woken up and see her cousin, his name is Avan one of the member. He is the byakko-petal. And told her that he found their comrades, which is Sheezu and Windderra. After all that on the day after they found out that luna died, And they have to find Lucifer before they go to the flotting island. when they got there Fiona found out why she has the beasts inside of her. When that is over they are going to the fira kingdom.

The 4 Petals And Guardians Of Light The all elements

This is the fifth series. It's in the Fira Kingdom like the first series. After a few day from summoning Linania god, in a normal life when a game was over Fiona and J.frost went out side to talked about their reincarnation. After that whey were attack, J.frost was injured, Fiona was capterd and left her necklase behind. Then a day for the last battle. Fiona is brainwashed, so she is on the enemies side. You will find out how the story goes.

The 4 Petal And Guardians Of Light The New Life

This is the six series. On the planet earth there is a girl the reincarnation of Fiona. On a high school trip with her school to China. They are staying there for 2 years of learnning Kung-fu. The girls name is Fio Akura she has gone to the mountains to train for a little bit. On the next day China was attacked by a creature called O.S.T.O at that time Fio remembered something about her being Fiona. Then she heard that her friend Zen is in a broken bulding. She went to help him, then something was flying douwn and some people was in it. It was some people from the T.W.H.C. And that person was The reincarnation of Dire named Jilana, and the reincarnation of Jack-The-Ripper.

The petals and Guardians of light Double

This is the last series. Back on linania with Dire and Fiona it has been 19907 years since they were gone. Fiona is still part of the company, and Dire is just doing her thing. Then joji made a machine which teleported fiona and Dire to a nother world and met Rion and Derik which are their double.

Thank you for readding have a look with the other ones too. please